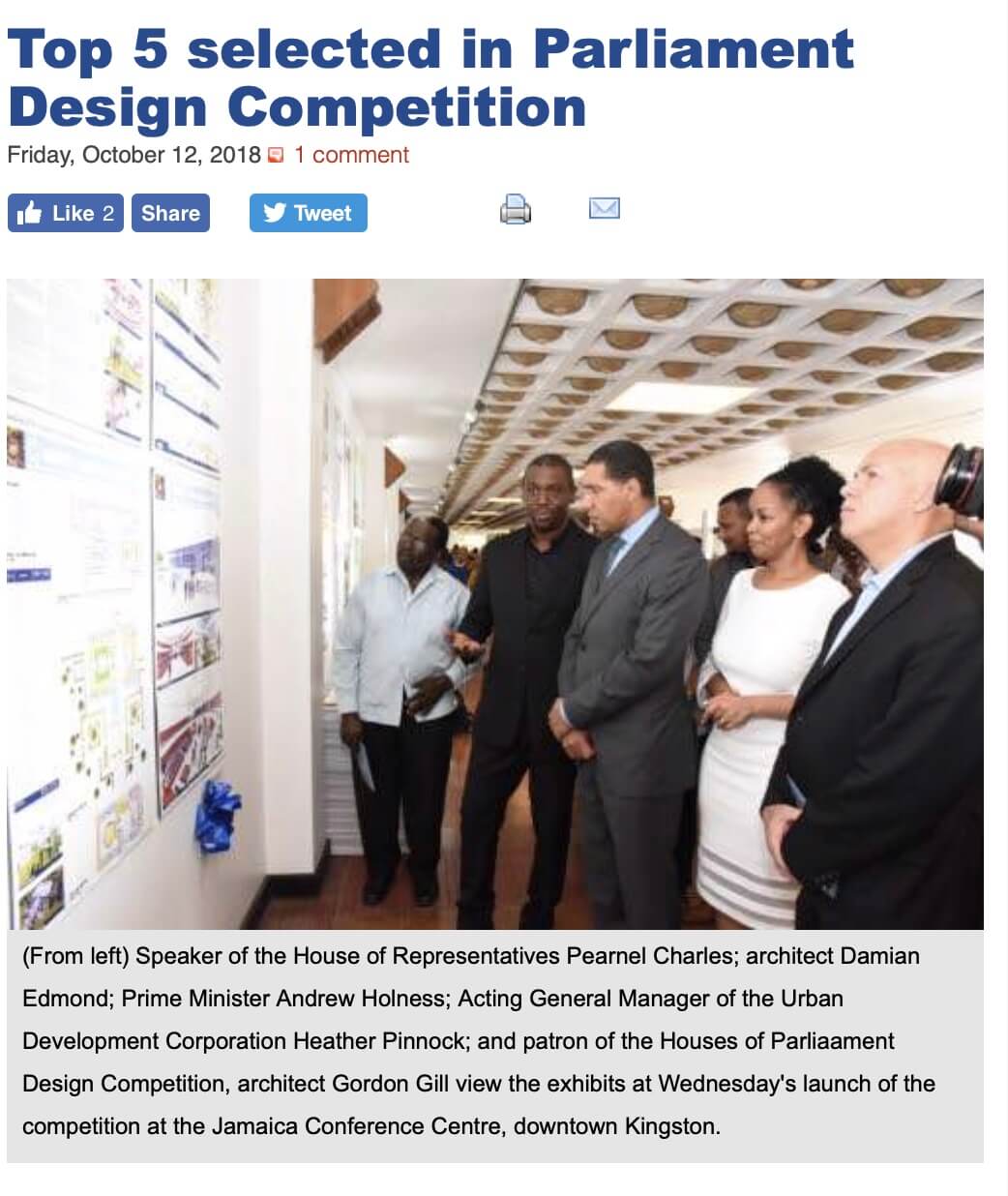 THE top five designs selected in the Government of Jamaica Houses of Parliament Design Competition were announced on Wednesday during the launch of the competition’s exhibition at the Jamaica Conference Centre in downtown Kingston.

Acknowledging the significance of national architectural design competition during the 50th year of the UDC, Prime Minister Andrew Holness noted that the approach had reaped positive results.

“This creative methodology of allowing as many Jamaican architects to vision our new Parliament has resulted in designs of significant quality. This is an important signpost in our country’s history and it is crucial for Jamaicans to be part of the process as partners. As Jamaicans, we should be enormously proud of what is presented by our architects and other professionals. They have risen to the challenge,” said the prime minister.

A total of 24 designs from 178 team members comprising local Jamaican interests and Jamaicans living in the United Kingdom, Trinidad, Guyana, United States of America, Argentina, Italy, Canada, Serbia, Turkey and Iran were submitted for judging by the competition’s panel. They were reviewed based on a number of criteria outlined in the competition’s terms and conditions. These included concept and theory; architectural expression, language and form as well as the design’s relationship to context (urbanity).

According to jury chair, architect Mark Raymond, the entries were impressive, and agreed-upon collectively.

“All the designs were individually and exhaustively discussed with a deliberate focus on the merits of each entry. The jury was impressed by the overall range, diversity and quality of the entries. They demonstrated a profound and concerted effort to creatively address the challenges presented by the site [National Heroes’ Park], the programme and the symbolic significance of the building,” explained the jury chair.

Raymond and the other members of the jury — Dwight Ricketts, Jacquiann Lawton, Dr Elizabeth Pigou-Dennis, Richard Picart, Martin Addington and Christopher Lue — decided that based on the quality and diversity of the submissions, an additional four entries were worthy of special commendation. These are designs from teams represented by Mark Taylor, Christopher Whyms-Stone, Adrian Smith and David O’Connor.

While the top five design teams were each awarded $2 million for advancing to stage two of the competition, the ultimate winner will be awarded a further cash prize of $5 million when selected by the judges in February 2019. A people’s choice component, to allow the public to vote in January 2019, will also be taken into consideration when the judges deliberate the winner of the contest. The winning team will be offered the opportunity to work as part of the implementation team. Second place will be awarded $4 million and third place $2 million.

The five design teams are to submit more detailed designs, to include massing models, by December 18th.

The 24 architectural designs are currently on display at the Jamaica Conference Centre through to October 24. The exhibition will be open between 9:00 am and 4:00 pm, Mondays to Fridays. The public can also view all the entries via the competition’s website and join the online conversation by using the hashtag: #ourjaparliament.

The Houses of Parliament Design Competition is being managed by the Urban Development Corporation on behalf of the Government. The competition is also granted oversight by a parliamentary steering committee for the duration of the competition.