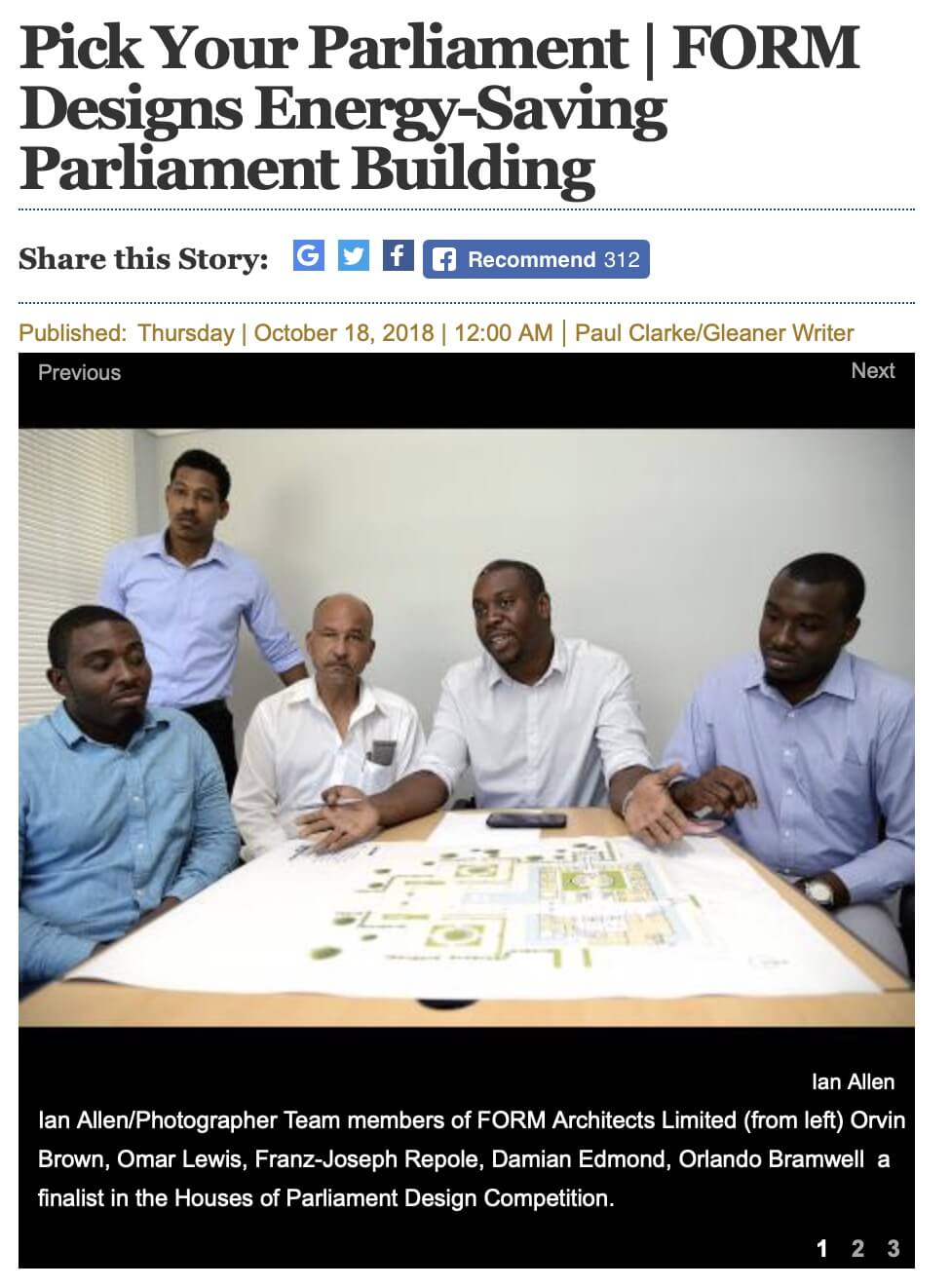 Over the next few days, The Gleaner will be publishing features on the five designers shortlisted for the new Parliament building to be constructed at National Heroes Park in Kingston. During the period, readers are invited to submit comments on the designs. Once all have been featured, readers are asked to vote for the one they think should be selected as the design for the new House of Representatives. Send your feedback on WhatsApp to 1-876-499-0169, email at editors@gleanerjm.com or onlinefeedback@gleanerjm.com.

A building by its mere design will attract the stares of passersby, but Jamaica’s new Parliament building conceptualised and designed by FORM Architects Limited is to be more than a beautiful structure. It is to be a stunning declaration of Jamaica’s power, sovereignty, and ambition in a new age of corporate responsibility.

“We have designed a building with certain key things embedded that we thought was important, such as an attempt to generate the idea or thought of the community. It was an idea that fashioned a Jamaica that was caring, respectful, and compassionate. This new Parliament building (to be constructed at National Heroes Park), apart from being the seat of power, must represent the people,” according to the firm’s principal and managing director, Damian Edmond.

FORM’s concept is one of five submissions left in the running for the coveted right to have its design of the country’s new Parliament building taken to the construction stage, as the ongoing Houses of Parliament Design Competition builds into a crescendo.

Apart from the many unique physical features built into the design, Edmond said it must also be a structure that elicits in the public mind the idea of a village.

“We tangled over this; how to make a building express words it can’t speak. We wanted to convey the idea that as a people, the village must still help raise the child; that the Parliamentarians who will be the main occupants of our design carry out the people’s business with honour, respect and decorum,” Edmond stated.

“So we came up with a schematic approach and we searched for one word that encapsulates all these great community values that we have lost over the decades, and we found one word, ‘Ubuntu’. It essentially translates ‘I am because we are’. So that is what we want this building to be. A place where our elected leaders care for the population they lead and the population respects the leaders.”

In this concept, the architects arranged all the internal spaces in a way that bring the people in close contact with the elected representatives. Various spaces on the inside and the courtyards allow the building to be naturally lit, allowing it to be energy efficient, and connecting to the external park. It is also designed to be part of the communities around it.

“These things were critical, central, and very important to us, and we believe we fulfilled all these elements in our design,” said team member Orvin Brown.

Edmond and Brown, along with Franz-Joseph Repole, Omar Lewis, and Orlando Bramwell, are team members at FORM Architects, a regional company with offices in Jamaica and Trinidad and Tobago.

Their interpretation of a Parliament building, according to Edmond, is an edifice that speaks the language of the people, attracting bright minds and one that is able to send a progressive statement.

“A Parliament building is a once in a lifetime construction opportunity. It is expected to last decades, maybe centuries. It is probably one of the most significant architectural buildings you will ever design in your life. It must define your capital,” he stated. “This competition was put together and we decided to be part of it because it is such a significant milestone in our history that we are going to build our very first dedicated Parliament building, because Gordon House was really and truly not designed to be a parliament; it’s a makeshift Parliament for far too long.”

Repole said that with the company now on the verge of its biggest coup if it manages to top the other four finalists, it would represent a defining moment for Jamaican architecture.

“That we are on the cusp of creating our own seat of power and our own symbol of democracy is a massive thought. It’s more than we can imagine at times,” Repole said.

DESIGNED TO BE AN ICON

The design in its basic configuration is of a building comprising two courtyards – on one side you have a ‘section’ for governance matters and on the other side you have the public realm.

On the governance side, there is the Parliament Chamber, the main Chamber, which rests in the courtyard, allowing occupants in the offices to look into the courtyard and out. All the rooms and offices allow for maximum lighting and ventilation on all sides, making it unnecessary to have artificial lighting.

“The lobby will connect the park on one side and the shrines to the next, and we have created an entire plaza at the front that allows for events and other activities,” explained Edmond, with a look of satisfaction.

“We designed it to be an icon, the seat of our power and the envy of other Caribbean nations because it will be a proud-looking building that points hearken to our past, but looking forward into the future.”

The main feature of this design is that no part of the external skin of the building is exposed to the sun. It means that there is no heat transfer from the outside to the inside of the building.

“That the building will be naturally lit, utilising daylight is in and of itself a tremendous move towards greater energy efficiency, and the next thing is that we made sure that every little space in this building is naturally lit. On top of all that, the entire roof is to be made from solar panels,” Edmond said.

It will also boast a rain harvesting mechanism that can be used in all its maintenance function on the building.

Another of its features is a pool that runs the entire length of the building to provide a cooling effect and which will further be used to regulate the relative humidity inside the building.